Yangon boasts the largest density of colonial architecture in the world -- the city’s urban landscape is dotted with historical relics nestled between stark steel high rises, crumbling apartment blocks, and gated modern homes. As the city modernises, these structures carry their stories through time into the current age. One such building is 22 Kabaraye, a charming colonial brick villa restored by Yoma Land into Yoma Central sales gallery. We documented its journey through time, its renovation and upgrade by Yoma Land, and the noble trees that sprung up around it over the last century.

Sometime in the early 1900s, the plot at 22 Kabaraye was granted by the British Crown as freehold land to the Arracan Co. Ltd, a London-based rice trading company. The company operated primarily in British Burma, with branches in Calcutta, Bangkok, and Saigon. In the 1920s, a mansion was built on the property as a residence for the company’s manager in Myanmar -- the very same teak and brick structure that stands today. Over time, a lush garden sprung up around the house.

In 1962, the property was handed over to Mr. Willoughby, GM of the Company and was eventually inherited by his wife, who no doubt spent many balmy, humid Yangon seasons enjoying the shade of the traveller’s palm, the nuts from the gnarled cashew tree, and the fragrant pink flowers of the Pride of Burma tree (amherstia nobilis) that graces the garden to this day.

When the family left Myanmar, they left the house to the care of the British and Australian Embassies, which worked on renovating the building to be used as a residence for their diplomats. As the popularity of the sport grew in Myanmar, a tennis court was constructed overlooking the gardens. At some point, the old cashew tree that grew proudly in the garden was struck by lightning during a typical monsoon storm and was nearly burned to a stump.

By the time the mansion was handed over to Yangon’s first French fine dining restaurant Le Planteur in 2006 the traveler’s palms that graced the front of the building stood over 15 feet high. The house once again bustled with life and many a romantic dinner date was to be had under the amherstia tree towering over the garden. During Cyclone Nargis, the old cashew was completely uprooted and had to be replanted. Over time, a bougainvillea began its slow climb up the bark of the knotted old tree.

Nearly a century had passed when, in 2016, Stephen Purvis,architect and Head of Yoma Land, was granted the opportunity of using this unique place as a location for the Yoma Central project’s show gallery. Speaking about his time restoring the mansion, he said, “Restoration of a building like this is a labor of love and requires sensitivity combined with technical knowledge, experience and patience. You have to respect the spirit of the place and not fight it. Although tiny in comparison to the great projects of the company, it is no less important. It was a great personal joy to work with such a great team of people and I made sure I found time to visit the site every Saturday to spend a few hours helping resolve details and encourage the craftsmen and staff.”

Plants on the wall
Detail sketch

Over the course of the restoration project, a great story of mentorship emerges. Charles Kinnear and William Gilchrist led the 22 Kaba Aye renovation project. With over60 years of experience in construction and architectural conservation between them, Charles and William recall the scuffed teak floors, leaky tin roof, broken windows, and crusty paint peeling off the walls and ceilings brought back to their former glory with the help of the all local team of contractors and artisans. One of them was the renowned interior designer Mya Myitzu, founder of M Interiors and Design. MID was awarded Best Leisure Interior by The International Property Awards 2019 APAC.

“When I look back at the amount of time and attention to detail required of every single person, from the teak parquet experts to old brick pointers… Mya losing her sleep over perfect grouting on the stone floor, it was not easy but we achieved the best quality without any foreign labor. Our contractors were 100% Myanmar,” states William proudly.

Mya, reflecting on her work with Yoma Land, said, “This was beyond a job for me, it was an arduous labor of love and a bold statement. I am proud as a Myanmar designer to have worked with a local team, craftsmen, and suppliers to come together to create technically challenging designs and world-class finishings for one of the most professional and organized developers in Myanmar. I was thrilled for the chance to design my own ‘Myanmar’ trellis and incorporate the history and architectural details of the Myanma Railways building in the wallpaper and carpet designs. A project like this is really special when everything from the air conditioner, to floors, to the print on the carpet and walls, and almost all of the furniture is 100% custom designed for it. I’m thankful to have worked with the Yoma Land team who let me exercise these ideas and supported me in these milestones. The International Property Award (IPAX) certainly noticed our efforts and I won an award for this project.”

The damage to the building over time was no doubt extensive. Luckily the bones of the building were still strong and the restoration team world-class. The walls and structure were inspected and reinforced, the old teak staircase painstakingly restored under the watchful eye of Charles, original teak windows stripped, repainted and refitted to their frames.

Time, ample rain, and a lush overgrown garden meant that wildlife began creeping back to make homes of the rocks, trees, and bushes of 22 Kabaraye. Left to its own devices, nature began to reclaim the neatly manicured yard and brought reptiles, insects, and rare birds to inhabit the tropical foliage. Renovation staff found scorpions nesting under a rock collection at the far end of the garden. Hawks rested in the branches of the now massive amherstia tree and stalked the gardens as their hunting grounds. Charles’ site office desk was even briefly occupied by a “friendly” viper snake.

The restorations to the garden were extensive. New turf, neatly trimmed, replaced the tall reedy grasses

that housed poisonous vipers. The traveller’s palms that framed the portico were dug up and replanted

to better frame the garden. The cashew, clinging on to its last shred of life, was nursed back to health.

The Pride of Burma once again bloomed proudly for all to enjoy. Over the course of about 16 months, the

mansion at 22 Kabaraye and its gardens has been given new life and renewed glory.

William retired in February 2020, after years of faithful service to the craft, while Charles will continue

his good work as senior construction manager on Yoma Central site. He now oversees the renovation of

historical landmark. Each of these restorations carries with it their own histories and we are eager to

Charles Kinnear & William Gilchrist on the day of William's retirement

The 1920s villa after restoration

Part of the original team with friends and partners

(from the right, the back row) 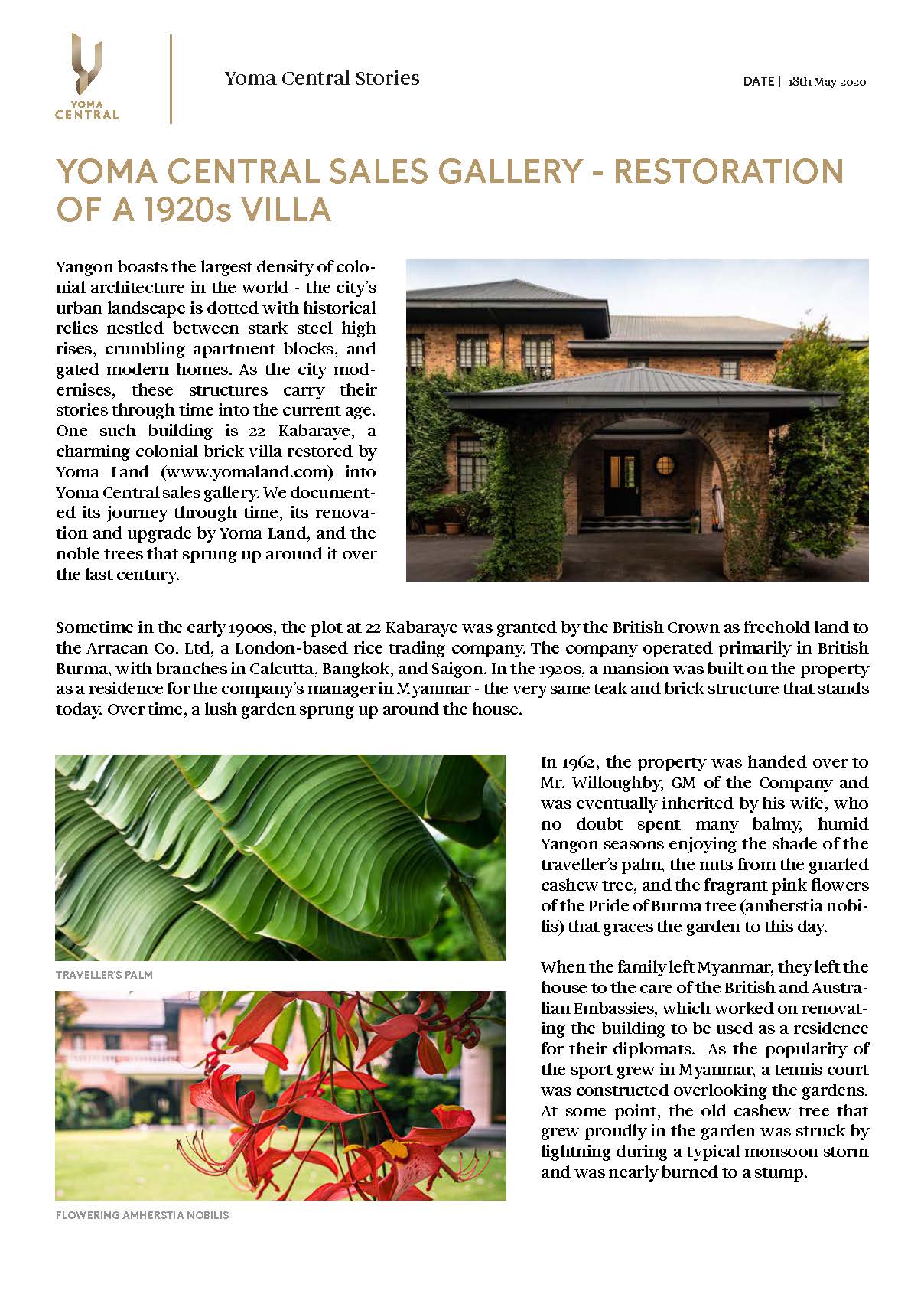 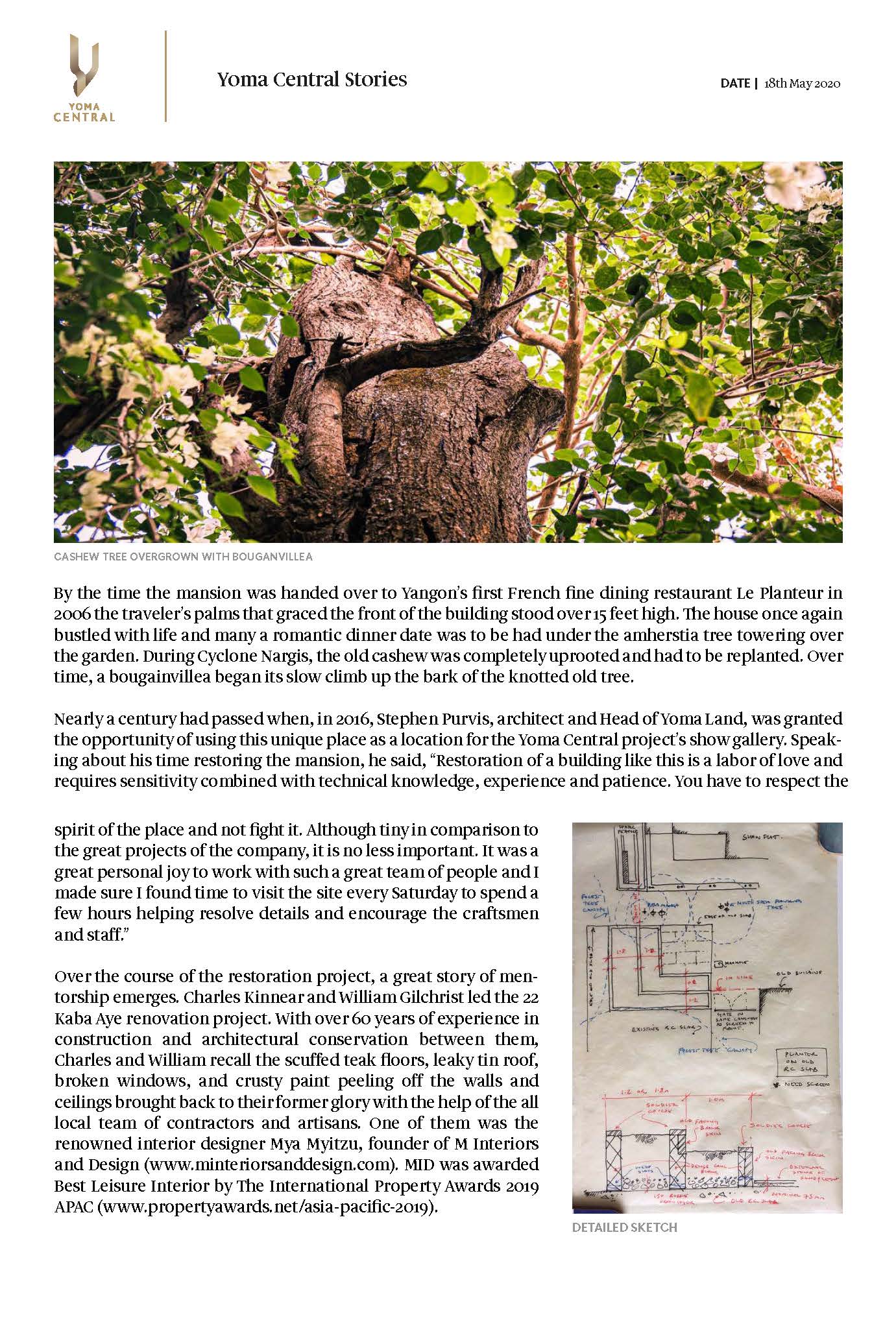 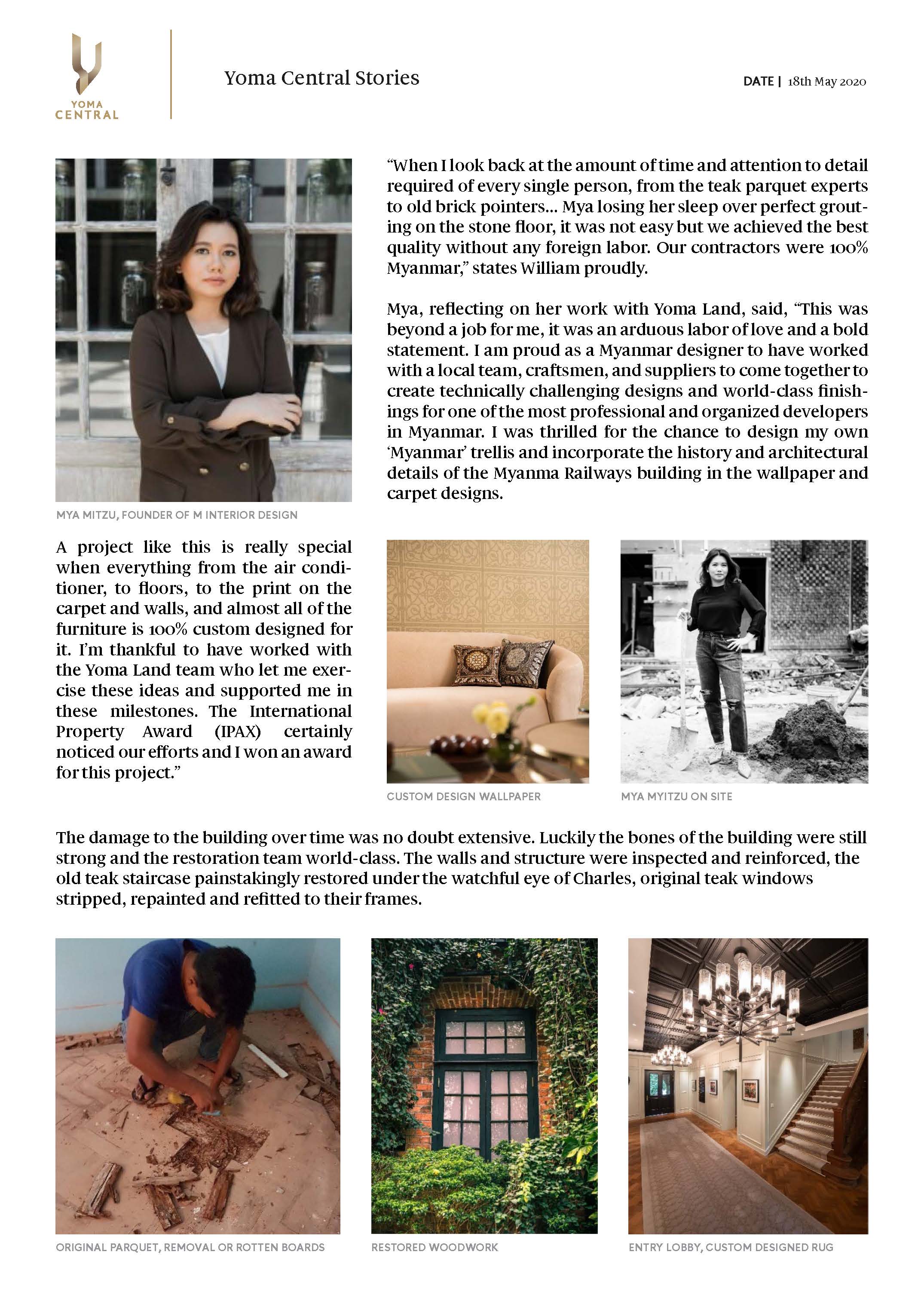 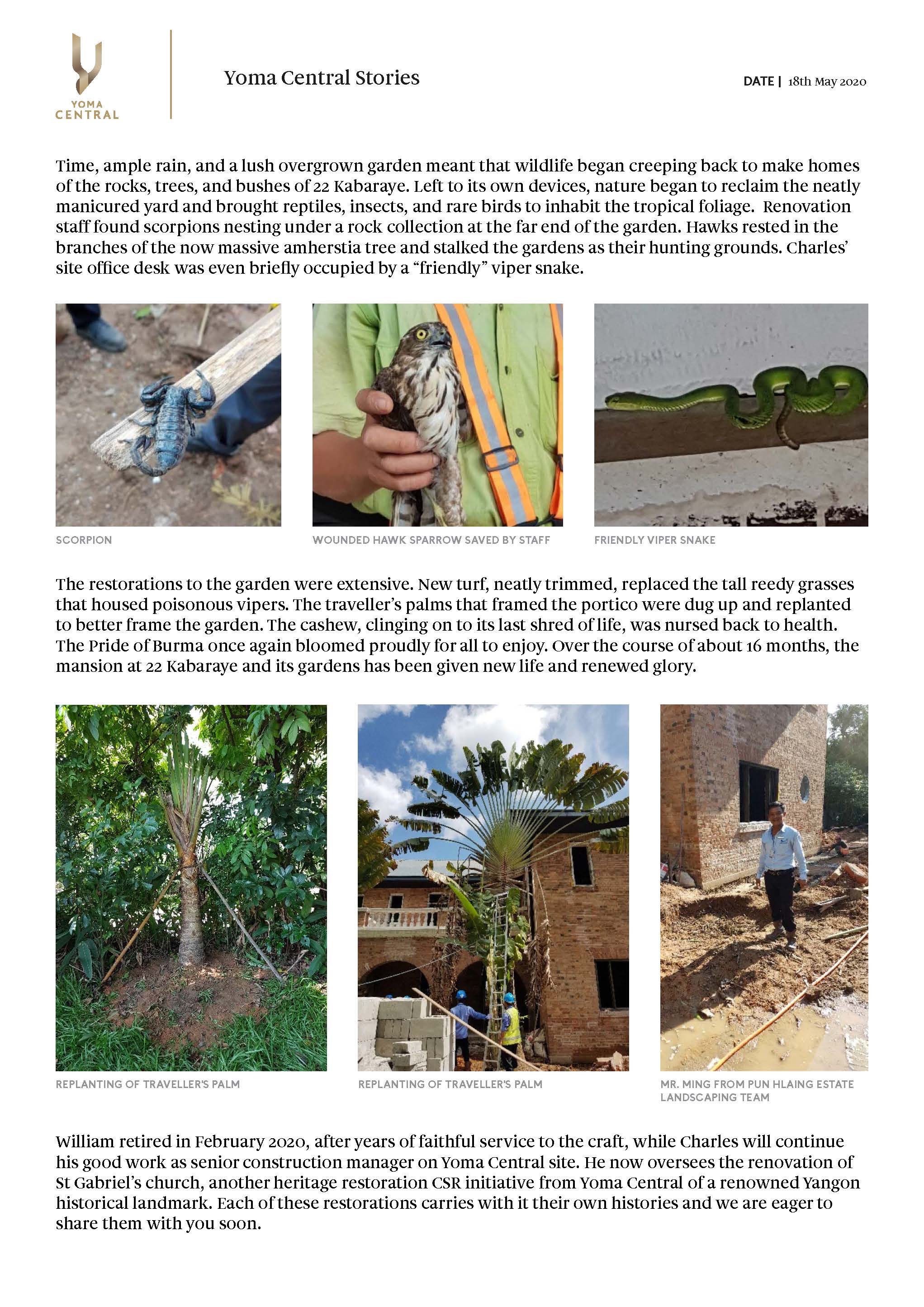 Solar: The Future of Power Resilience